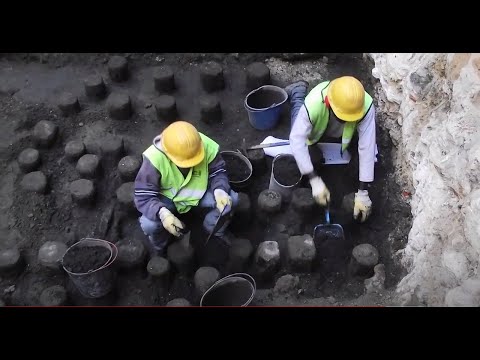 Pombaline stakes took a prominent place in the imagery of the reconstruction of Lisbon after the 1755 earthquake, however there are few specimens accessible to the public. Wrapped in fascination, the stakes - which still support blocks from downtown today - have become an inseparable icon of the landscape of a rational and enlightened Lisbon, but invisible to most of those who pass through it.

In a scenario where specimens visible to the general public are scarce, the archaeological excavation of the Banco de Portugal Headquarters became a rare opportunity to discover and study a significant set of stakes and to display some of the collected specimens. This temporary exhibition gave the city the rare opportunity to uncover a huge set of stakes, which was revealed to the public.

Including some of the documentation produced in the context of archaeological works, this exhibition highlighted the fundamental features of stakes as a functional and symbolic element. An image of excellence of the (re) foundation of Lisbon, hidden under our feet.

(Re) Foundations of Lisbon
Temporary exhibition that took place between 16 October 2015 and 21 May 2016.
Initially, this exhibition was scheduled to end on February 27, 2016, but due to the high interest it was prolonged.

During the course of the exhibition there were visits guided by Archaeologist Artur Rocha.

« Back to Past Exhibits